Sunday 12th June 2022 opened with sunshine and a few clouds which was a great start to the day as Market Overton Bowls Club was expecting another visit from The Friends of English Bowling.The Friends of English Bowling was formed in 2005 and is the biggest supporter of the sport of outdoor bowls in England, using its funds to back National Championships and Competition events, to support Disability Bowls England, assist youth development and support First Aid facilities.  Over the years the Friends have been able to donate hundreds of thousands of pounds and hope to remain being able to do so.Their members travel miles to compete and support the group. We have been fortunate to have had several visits over the years and it is always great to see the familiar faces like Aidie Lloyd, Match Secretary and lovely wife Kath who for many years was Treasurer and is now Chairman.Paul Robson Senior Past President of Bowls England, who hosted a match against us last year to celebrate the 75th year of the Club, was another familiar face, together with wife Leslie. This time the Friends had a new Captain for the day Clive Handscombe, who has taken over as Treasurer. The Friends team drive from all over the country and therefore some have very early starts. Others had been in a match with another local club the day before so had stayed in local hotels. Arrivals began soon after 10.30 a.m. The tea and coffee was already on the go and there was time for a catch up with the Secretary before the whole team was present from both clubs.Terri Keen from Gerrards Cross, Buckinghamshire succeeded Paul Robson [Hampshire]  as President for Bowls England and had a pretty horrendous journey due to an accident en route but thankfully arrived in time to play the game.Market Overton President Jonny Abbott welcomed the visitors and Club Captain Liz Dyer soon had the teams announced on the rinks. MOBC has been fortunate in recruiting a number of newer bowlers recently and therefore were able to present a representation of both experienced and novice bowlers. This was of course great experience for them. We know the Friends beat MARKO overall with a score of 87 to 72 but did it matter? I don’t think so. The winning rink for MARKO included Bruce Acock, Jeannie Hutton, Jonny Abbott [President] and Skip [Club Captain] Liz having a good score of 26 to 11.   The losing MARKO rink winning the winegums were Jeff Willcox-Smith, Dave Edwards, Sue Fleckney and John Mitchell.By around 4.45 pm the 21 ends were completed  on each rink and it was time to head to the bar and the red white and blue table settings for the cooked meal prepared by MOBC members. This is the time when the bowlers have time to relax and chat among themselves.At the end of the meal the Captains and Presidents on both sides exchanged gifts  and with grateful thanks to the super hardworking Greenkeeping team at Market Overton the festivities came to a close.

Annette Oliver, Secretary.  (Photo's of the day below).

In 2019 we had a lovely visit from The Friends of English Bowling, including 15 times world champion Tony Allcock.

Although the weather was not the best, we managed to get a game in, and a good time was had by all, followed by a nice meal prepared by our very own ladies, thank you. (See photo's below). 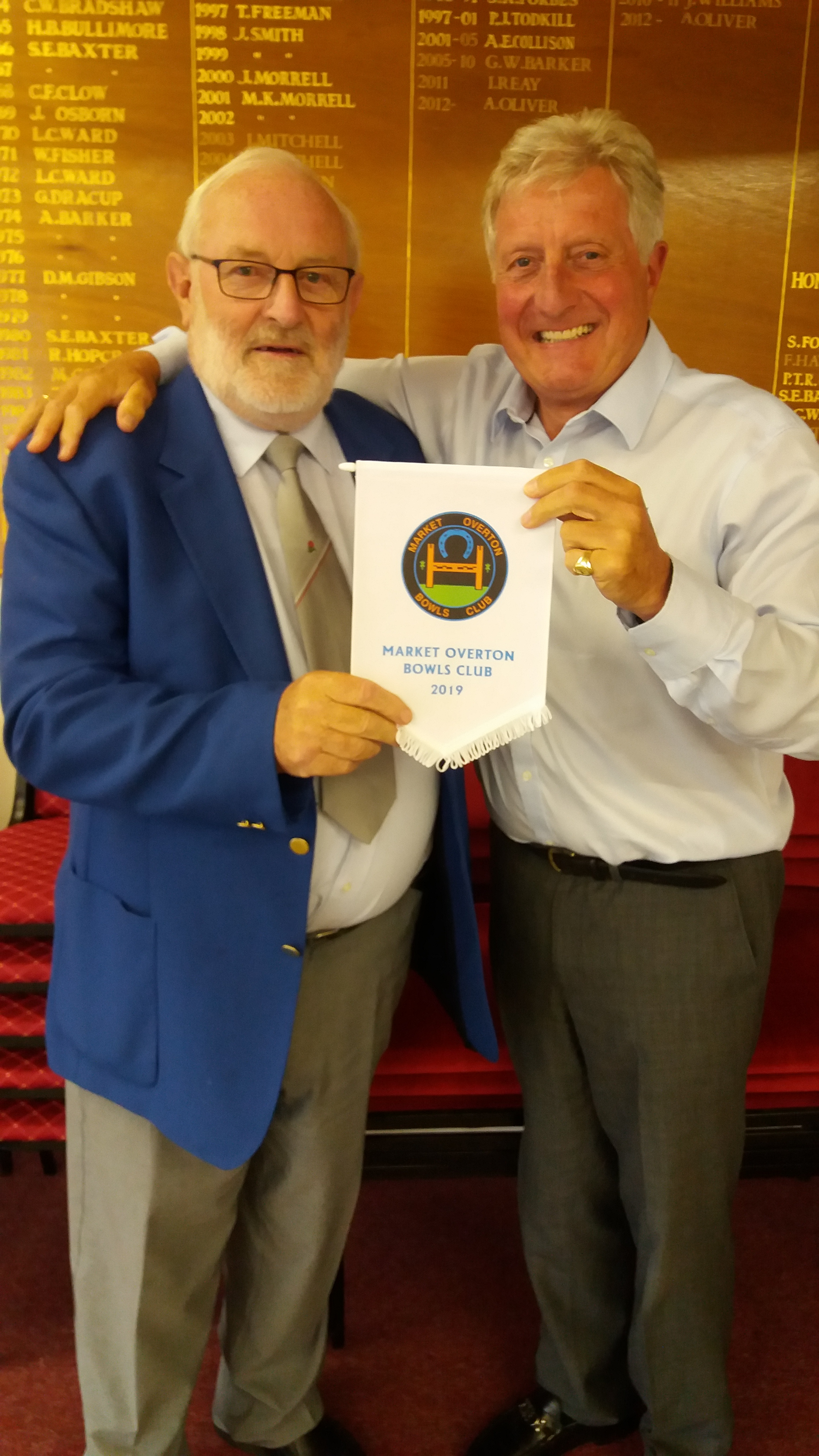 Aide Lloyd of 'The Friends' with Tony Allcock